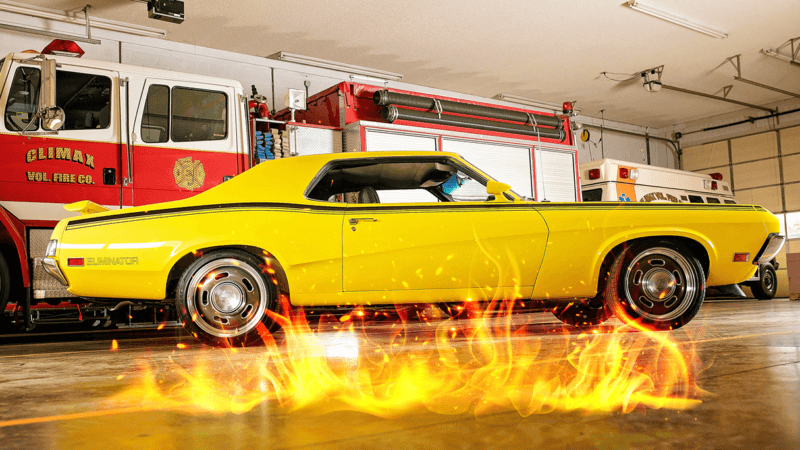 The Lethal Cat was in the Cliff Ernst (Tennessee) car collection. Ernst was primarily a Yenko Camaro guy, but he had a few other interesting cars, including the Eliminator.
It was purchased from Ernst by Trucks and Stuff (Frank Bowers, Wister Oklahoma). I purchased it from Frank Bowers, May 6, 2000.
When I bought the car from Frank Bowers, I was looking for a “driver”. He had posted it for sale on the Internet, and he was showing it at a car show in Oklahoma since I live in north Texas, it wasn’t too far, so I drove up to the show and bought it. It was what I wanted. It had some things that weren’t right. The power steering pump brackets/setup was wrong. The emission stuff was all bypassed. The carb was the correct number but the front bowl was not right.
It wasn’t perfect, but it was a numbers matching, 428CJ, 4speed, the main things I wanted. The hound’s tooth interior was cool too. I bought it to drive it, not show it so much, and that’s what I did. Took it out on weekends and enjoyed it.

Then the engine fire. Hate even thinking about it. Went to start it up, cranked it for a while, wasn’t starting. I remember thinking I should pop the hood and take a look, then thought one more crank. And POOF. I had a fire extinguisher in my van right behind the car, ran grabbed it. Popped the hood, was driven back by the heat. Pulled the pin and fired the extinguisher, and it went PFFFT, and nothing came out. (It was expired and had no pressure even though it was never used. Word to the wise, CHECK YOUR EXTINGUISHERS!!!)) Slammed the hood shut, to reduce oxygen to the fire, ran and got the garden hose and cracked hood and sprayed. Hose wasn’t doing much. By then the neighbor was in the driveway, told him to call the fire dept. Ran around garage pulling out cans of gas, and anything flammable. Firehouse is only about 5-6 blocks away. They got there and tore the heck out of the car putting out the fire. They pushed it out of the garage and dumped water on it until everything stopped smoldering. UGH, hate thinking about it.
Some pictures of it the next day, still in the driveway like they left it.

Started thinking about what to do. Could take the insurance and get rid of it, or could save it and restore it. Checked around with friends and Internet, and that’s when KTL came up.
I gave Kurt a call and told him the situation. He said to send him some pics. I called him back after sending the pics thinking he would tell me it was junk and not worth restoring.
Surprisingly, he said he didn’t think it was so bad. Based on how I described it he thought it was going to be a lot worse. The pictures were bad, but not hopeless. It was restorable! I was excited, and bringing these cars back from the dead is worth it to us car guys. So we decided to bring it to KTL (it was KRC at the time, but you know that story better than me). I put the Eliminator on my trailer and brought it out to KTL in Sept of 2014.

From the phone conversations, I could tell Kurt knew Cougars. I felt even better when he looked over the car when I bought it in. He immediately knew the power steering pump setup was wrong. He was pointing out there was a lot of original parts, like even muffler brackets. He even saw that it had an SCJ fan on it. The reason it has an SCJ fan on it is that when I went to Bowers shop to pick it up, the original fan apparently had a shot clutch, so Bowers had an SCJ fan lying around and he had swapped that onto it.